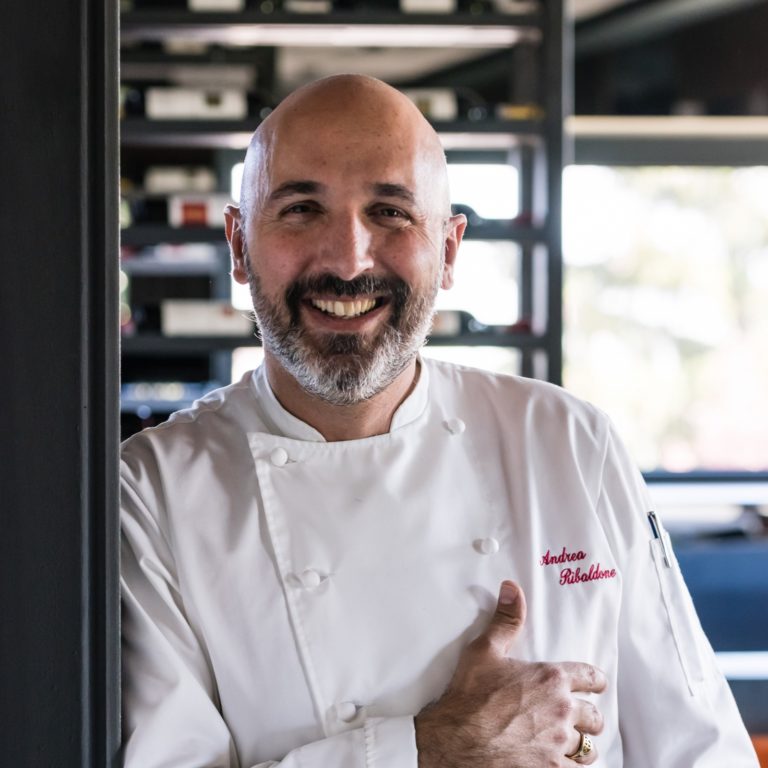 Andrea Riboldone was born in Milan but has Piemonte blood in his veins.  His father comes from Lu Monferrato and his mother – his undisputed teacher in the kitchen, an excellent cook and guilty of having transferred her love for good food to her son – is also from Piemonte.  The cook’s grandfather, instead, had a famous pasta factory in Milan.  Following WWII, he furnished the military.  He invented the famous pasta, “Ruota”, that has the form of a wheel.  None of his descendants continued in the pasta production tradition, but his grandson, Andrea, opened a brewery.  He then leaped into Riccardo Aiachini’s burner brigade in Alessandria at the beginning of the 90’s.  He began cooking in 2000, by convincing his maestro to appoint him to the “La Fermata” restaurant in Spinetta Marengo. It was there that the first Michelin star was awarded in 2003.  They worked together until 2012, when Ribaldone decided to set off on his own.  He established the Arco society, acronym for Andrea Ribaldone & company, an authentic fusion among associates who were coordinated by chef Andrea who wanted to make use of his experience in the kitchen, to deepen his knowledge of quality Italian food abroad, and much more.  Arco offers consultation and training, research and promotion of quality products, plus Andrea’s flawless direction in cooking for important events.

The public is used to seeing the cook on TV, in “La Prova del Cuoco” (ndt, a well-known cooking show on Italian TV) or in his books explaining his cooking philosophy.  Ribaldone can claim important collaborations, such as that with Eataly Tokyo, as the executive chef and consultant, alongside other important food realities.  He began consulting as F&B Director for JSH Hotels &Resorts in 2013. He opened the restaurant I Due Buoi in Alessandria in 2014 that was awarded a Michelin star in the 2016 edition.  In 2015, he became the executive chef in the Identità Golose kitchen in EXPO, a role that was renewed in October 2018 as director of the Milan Identità Golose kitchens in via Romagnosi.

In March 2017, he took command of the “Osteria Arborina”, in the Relais a La Morra in the Langhe area.  The Michelin star arrived almost immediately, just as it was also awarded at “Due Camini” di Borgo Egnazia in Puglia in November 2018.